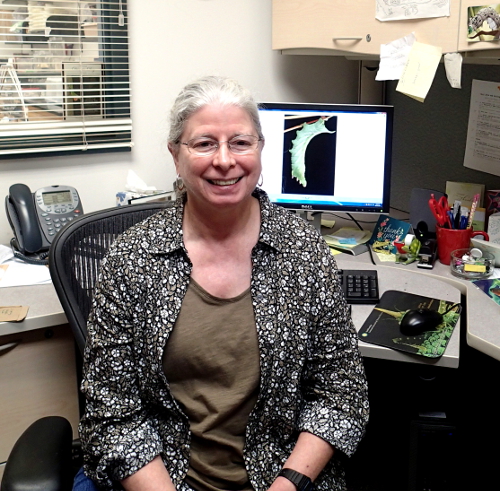 My passion is the behavior and ecology of tritrophic interactions involving parasitic wasps, caterpillars, and plants. Although I have worked with many parasitoid-herbivore-plant systems, my favorite (for >25 years) is the braconid wasp, Cotesia congregata, the tobacco hornworm (Manduca sexta), and tobacco, as well as other sphingid caterpillars and their food plants. My research focus is "vertical" rather than "horizontal" in that it seeks to understand multi-species interactions across trophic levels, and includes field work, behavioral and feeding studies in the laboratory, and (through collaborations) the ecological genetics of C. congregata and molecular genetics of a symbiotic polydna virus associated with different caterpillar-plant sources of C. congregata. A secondary research interest is the use of indigenous and released arthropods for environmental surveillance and collection of biothreats, including human pathogens, explosives materials, and human DNA. Also, I have broad experience and a demonstrated commitment to innovative teaching, undergraduate curriculum development, undergraduate and graduate research training, public education, and encouraging representation of students from underrepresented groups in biological research. 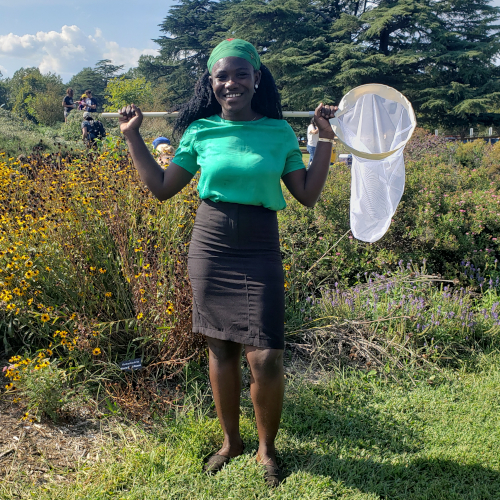 The lepidopterans (Sphingidae) Manduca sexta and M. quinquemaculata have distinct distributions outside of areas of sympatry despite their similar host plant ranges and a shared parasitoid, C. congregata. Although tri-trophic interactions involving these caterpillar species, their host plants, and this parasitoid wasp are well- studied from ecological and evolutionary perspectives, the underlying drivers of their distributions are not resolved. Lepidopterans are ectotherms and thus limited by abiotic factors such as temperature; however, these species may be more constrained by the presence or absence of certain host plants or parasitoids. My goal is to move beyond the traditional species distribution model approach (SDM) by incorporating population dynamics and spatial and temporal variation in abiotic and biotic factors. Doing so will provide an important assessment of the potential effects of climate change and the susceptibility of these two lepidopteran species to ecosystem change. Because these two species feed on major agricultural crops (tobacco, tomato), understanding their distributions and population dynamics has significant economic implications.

I graduated from Kwame Nkrumah University of Science and Technology (KNUST) with a B.S. in Natural Resources Management (Wildlife Option). I have worked on several projects, including an assessment of aquatic and terrestrial macroinvertebrate distributions on the Wewe River (Ghana), and the spread of the highly invasive species, Eichhornia crassipes, on the River Tano (Western Region, Ghana). I genuinely enjoy sharing knowledge and being a strong motivator to other youth in and beyond science.

M.S. Graduate positions in insect behavior and multi-trophic interactions involving insect parasitoids will be available in my lab beginning in August. I seek students who are passionate about insects and possess a strong work ethic. Preference will be given to students with prior research experience and solid writing and quantitative skills. Current research includes mechanisms of speciation in braconid wasps, insect-plant interactions, and the thermal biology of tritrophic interactions. Interested persons are encouraged to submit by email (kmkester@vcu.edu): 1) a letter describing their educational background and research experience, research interests, and educational and career goals, 2) a CV/resume with GPA, GRE and TOFEL (if applicable) scores, and 3) the names of three references. Applications to the VCU M.S. Graduate Program are due in mid-January. (https://biology.vcu.edu/grad/about/). Competitive teaching assistantships with tuition waivers and other forms of support are available. 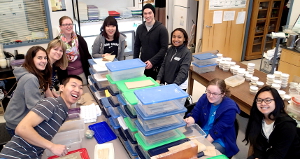 We have many undergraduate lab interns who assist with maintaining our caterpillars, wasp colonies, and research. 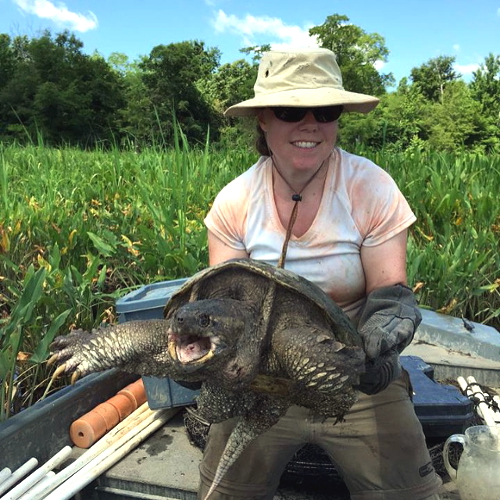 M.S. in Biology, May 2020
Thesis: The heat is on: Comparison of thermoregulatory behaviors in parasitized versus unparasitized caterpillars of the tobacco hormworm, Manduca sexta

My research focuses on determining whether the polydnavirus can control the thermoregulatory behavior of tobacco hornworms. Previous research has indicated that parasitic wasps have a lower tolerance in their upper thermal threshold than that of their host. I will build upon this existing research by analyzing the behavior of tobacco hornworms in the presence or absence of parasitic larvae within a thermal gradient chamber.

I graduated from Virginia Commonwealth University with a B.S. in Environmental Studies (2015). While completing my undergraduate degree, I volunteered as an intern in Dr. Karen Kester's lab. After receiving my B.S., I worked as a Wildlife Biologist Assistant for the Department of Inland Game conducting wildlife surveys in Central Virginia. My interests include insect-plant interactions and animal behavior. I enjoy spending much of my time outdoors kayaking, hiking, and swimming. 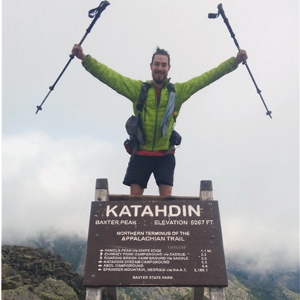 M.S. in Biology, May 2019 (co-advised with Dr. Salvatore Agosta)
Thesis: Upper thermal limits vary among and within native bee species in relation to season, voltinism, and nest type

Wild bees play an important role in both economic and ecological systems and their recent declines require a better understanding of their life history and general limitations for survivability. Recent studies are only just now looking at upper thermal limits of wild bee species across the east coast but fail to consider the possibility of altered thermal limits across broods per year (voltinism). For my thesis I will be examining whether upper thermal limits vary across voltinism strategies for common univoltine and multivoltine bee species in the mid-Atlantic region.

I graduated from University of Maine at Farmington in 2015 with a B.S in environmental science and a minor in geology. In spring/summer of 2017 I completed a thru-hike of the 2,189 mile Appalachian Trail (NoBo). 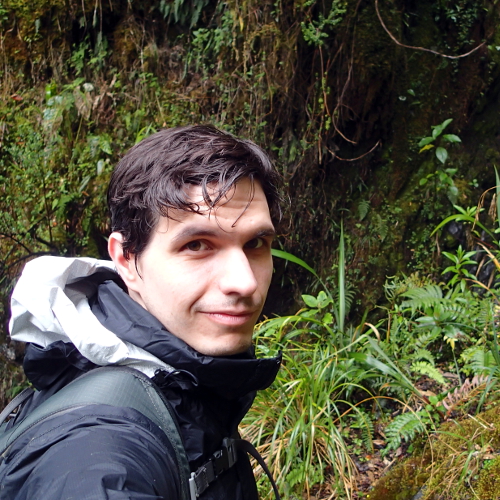 My research focuses on the mechanisms of speciation within Cotesia congregata, a parasitoid of sphingid larvae. Parasitic wasps are highly diverse, but relatively little is known of the mechanisms driving their diversity. I combine work at multiple layers from behavior and ecology, to molecular genetics of their symbiotic polydnavirus to understand the mechanisms leading to speciation. I have worked extensively on breeding crosses of different host-foodplant complex sources of C. congregata to identify patterns of reproductive isolation. I have also made comparisons of response to female pheromone and analyzed differences in male courtship songs.

I graduated from the University of Mary Washington in 2007. Before I started graduate school at VCU I worked as a field technician on several projects including mosquito collecting around Washington, DC for West Nile virus research, searching for the ivory-billed woodpecker in Arkansas for the Cornell Lab of Ornithology, and surveying wading birds along Lake Okeechobee for Florida Atlantic University. I also enjoy hiking, SCUBA diving, searching for parasitized caterpillars, and playing board games. 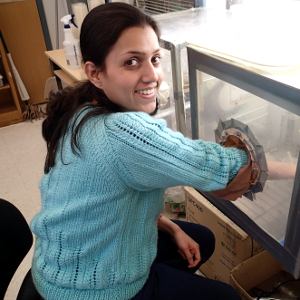 Among the various climatic factors, temperature plays an especially important role because it affects the rates of physiological processes. Ectotherms at higher tropic levels, such as insect parasitoids, are more likely to be affected directly and indirectly because their body temperature is tied directly to environmental temperature, and they are dependent on lower trophic levels for survival. Understanding and predicting the responses of the trophic interactions to climate change requires a better understanding of the basic thermal biology of the component species and their interactions. For my MS thesis I am looking at the thermal performance in a caterpillar-parasitoid-hyperparasitoid system using Manduca sexta, Cotesia congregata, and their hyperparasitoids.

I graduated from University of Pune, India (2010) in Zoology (Molecular Biology specialization). I worked as a project and field assistant (2 years) in the Center for Ecological Sciences, Indian Institute of Science in the forests of South India before coming to the US. I am interested in plant-animal interactions and animal behavior. I enjoy photography, painting, and talking to my plants and fish. I believe that one should always stay positive. 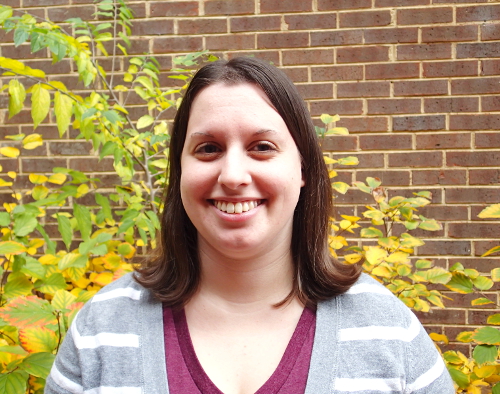 M.S. in Biology, May 2015
Thesis: Responses of the catalpa sphinx, Ceratomia catalpae, and its primary parasitoid, Cotesia congregata, to varying levels of iridoid glycosides in Catalpa

My master’s thesis research focused on the chemical ecology of the catalpa sphinx and its parasitoid Cotesia congregata. I investigated how the variation in iridoid glycoside levels may potentially explain the variation in catalpa sphinx infestation and rates of parasitism within and among our field sites. In collaboration with Dr. M. Deane Bowers at the University of Colorado, Boulder, we analyzed the concentration of iridoid glycosides in catalpa tree leaves from multiple sites in Central VA. Following this analysis, I performed catalpa sphinx moth ovipositional responses and caterpillar feeding responses to high and low levels of iridoid glycosides in choice assays. Parasitoid responses to high or low iridoid glycoside levels were assayed by quantifying searching responses of females. I also collected and identified hyperparasitoids of Cotesia congregata on catalpa sphinx larvae to estimate the diversity and patterns of hyperparasitism over a season.

I graduated from Longwood University in 2012 with a B.S. in Biology. I am currently a middle school science teacher.

M.S. in Biology, May 2008
Thesis: Behavioral and developmental responses of the parasitoid, Cotesia congregata (Say) to plants, with respect to host and hostplant origin: A test for local adaptation

M.S. in Biology, May 2001
Thesis: The effects of learning on the fitness and foraging behavior of the gregarious parasitoid, Cotesia congregata (Say) [Hymenoptera: Braconidae]